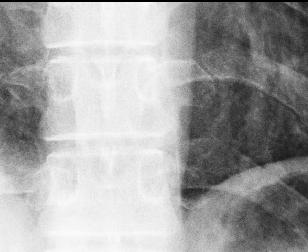 Lisa told me we should go to the emergency room. I did not want to, however. I was breathing, was not shot nor stabbed, I thought, so I could wait. At this point I remembered that I was supposed to be taking the kids to school. If we left now, they would only be a little late. I told Lisa that we could drive to St. Marys and stop by the clinic there. So we drove the 30 miles as I sat in the van seat, feeling every motion, every bump.
When we got there, we dropped off the kids and then Lisa brought me to the doctor. At this point, moving was not something I enjoyed, but I went to the office room, then to the reception, then to x-ray, and then back to the office. The doctor came and exclaimed that I had two broken ribs. He gave me a brace and a prescription for pain medication. That afternoon I was back at work for a couple of hours. Two days later, we moved. I think I'm going to give them a bit of a rest now though so they can heal!
And that, folks, is why you never ask for a break!
Posted by Scott Harmon at 7:04 PM