Way back when, I played this educational game called "Funnels and Buckets". I remember this being kind of fun when I was a kid, so I thought Ben might like playing it. Tonight I decided to code my own version from memory and with the help of a screenshot of the original version. I've never coded a game in Java, but I had some ideas of how to separate the update/model logic from the actual display. In about two hours this is what I came up with: 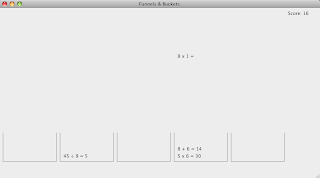 Right now it doesn't increase your level and it only gives you one point for each correct answer. This will most likely change to some scoring based on level.
Posted by Scott Harmon at 11:57 PM

I think, that you commit an error. I suggest it to discuss.

I'm not sure what you mean?

I am really old. I ordered it for my kids from reasonable software. My kids arent having kids yet but they are not too far behind you. Great replacement for the multipication and division sheets I used to get in grade school. If you are working on it. I would suggest being able to do each one seperately (add, sub, mult,div) as well as mix up. also beable to start at a higher level if you have different aged children. Also need to sugggest to get a 10 key pad for all people with laptops. Would be a huge hit. Think the user group is pretty big.